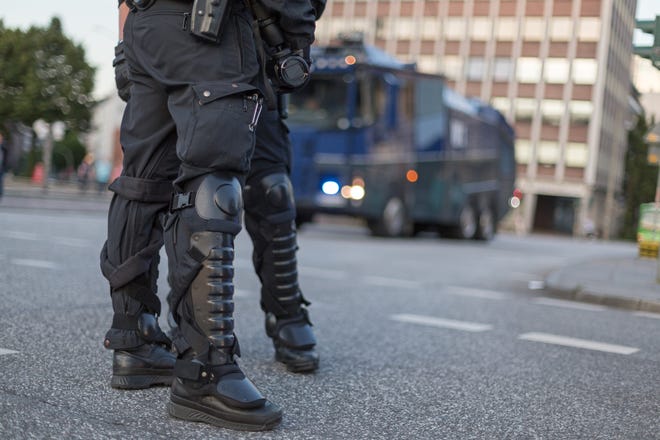 Cop’s commander asks: “Are you sure you’ve had hip surgery?”

Cincinnati law enforcement officer Mike Bell delayed getting hip replacement surgery for as long as he could stand the pain. But nearly eight years ago, he finally reached his limit.

“I was worried about how it would limit my ability to continue my job. I was on the SWAT team, I was on patrol, I was very active,” Bell said.

Bell’s wife, an emergency room physician, recommended that he consult an orthopedic doctor. They went to see Dr. Robert Burger at Beacon Orthopaedics, one of Bell’s high school football coaches. An examination and X-ray revealed that Bell had significant arthritis in his hip that was causing frequent flare-ups. Dr. Burger referred Bell to Dr. Haleem Chaudhary, a hip and knee replacement specialist.

“I was very apprehensive, but Dr. Chaudhary had a great bedside manner from the beginning. He basically told me that I would make the decision about when I would need the surgery. My big concern was how it was going to limit my movement. He said, ‘well, the only change is you’re going to be able to do what you’re doing now, but without pain’”.

Bell’s concerns were no surprise to Dr. Chaudhary, who regularly works with law enforcement officers.

“It’s very gratifying to help people who are protecting us,” Dr. Chaudhary said. “It’s like doing a service back for them. They’re tough guys, so they don’t come for surgery easily. They have a high pain tolerance, and I think the nature of the job can lead them to downplay the symptoms.”

Bell was no exception. He held off until January of 2013, even while undergoing an aggressive regimen of endurance training and continuing to serve on the SWAT team. When the pain continued to get worse, however, he finally scheduled the procedure. The results took him by surprise as early as the morning after his surgery.

“I was absolutely amazed I could walk out of the hospital under my own power, no crutches, no walker, no wheelchair and to my wife’s amazement, I had a small suitcase with a couple of items in it,” Bell said.” Of course, I had some pain from the incisions and things along those lines, but within a very, very short time I could tell I wasn’t having the joint pain.”

Bell had enough sick time built up to stay off work and focus on recovery. Soon, he was riding a recumbent bike at home to get the new hip accustomed to movement and making steady progress.

“Within seven weeks, I was back to full police duty with no restrictions. About a month after, that I was back to full duty on the SWAT team,” Bell said. “I was able to carry all the weight that we carry, the heavy vest, and everything along those lines.”

The big test came shortly after Bell returned to the SWAT team. While he had said he was “having a procedure done,” he hadn’t specified the type of surgery.

“My SWAT commander came up to me one day and said: ‘the rumor going around is that you had a total hip replacement,’” Bell recalled. “I said I did, and he said, ‘I’m keeping my eye on you today. If you have any signs whatsoever that you can’t complete the tasks, I can’t jeopardize the rest of the team.’

“He followed me the entire day through a series of very rigorous drills. We had heavy gear on and also had to make accurate shots. At the end of the day, he came up to me and said, ‘Are you sure you’ve had hip surgery?’”

Nearly eight years on, Bell is still active as a trainer on the police force, which often requires him to participate in physically demanding role-play scenarios.

“I’m one of the role-players that gets arrested,” Bell said. We’re up and down a lot. We’re being handcuffed. A lot of times we fall to the ground repeatedly or have to get back up. I’ve been able to maintain all of that well after the surgery, and I have absolutely zero problems with that hip.”

“I think with joint replacement, we battle against the misconception that it’s for older inactive people,” Dr. Chaudhary said. “But life doesn’t end with a hip replacement. If you can have a hip done and do the kind of stuff that Mike’s doing, you can pretty much do anything.”

“I was hesitant at first to have the surgery done, but afterward, my only thought was, ‘why didn’t I do that sooner?’ Because the pain was gone, but there was definitely a sense of confidence,” Bell said.