Written by Henry A. Stiene, M.D.

Perineural Injection Therapy (PIT) is a proven safe, effective treatment for patients who may not be candidates for joint replacement surgery or biologic options such as stem cell injections or PRP.  Perineural injection therapy treats inflamed and injured nerves.  Chronic nerve pain is often due to trauma, arthritis, sports, overuse, occupational, and surgical injuries.

Any sensation that is perceived by the brain is transmitted to the brain via the sensory nervous system.  This is true for sensations like pain, temperature, vibration, or pressure.  For example, when a nerve is stimulated by pain, the individual nerve cells generate an electrical current that is carried by the nerve to the spinal cord and then to the brain.

Imagine the individual nerve cell as being a room with a door (scientifically termed a receptor). When the nerve cell is stimulated, the door (receptor) opens and lets sodium, potassium, calcium, and other molecules in and out of the cell such as shown in the illustration below.

When this occurs and moves from one room to the next, an electrical current is created termed an action potential. When the stimulation is complete, the door once again closes. If the nerve is injured for whatever reason, this mechanism is disrupted. 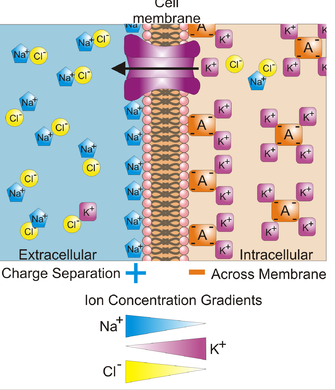 The nerve cell signals the brain that things aren’t working right by producing substances that cause pain and these slip out of the cell and let the brain know something is amiss.  Biologically these substances are known as Nerve Growth Factor (NGF), substance P (P for pain-someone gets the Nobel for coming with that name) and calcitonin gene related peptide (CGRP) to name a few.  With the nerve being injured, it continues to send a pain message to the brain even though the nerve is not being stimulated by pain. This creates a “short circuit” much like an open wire lying on the floor with electricity flowing through it. The substances that cause pain also prevent tissues such as muscles, tendons, and ligaments from healing.  The term used to describe these inflamed nerves is called neurogenic inflammation. 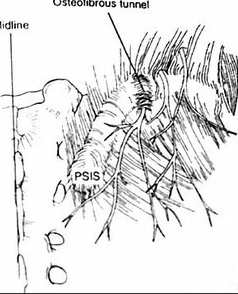 When a nerve branches it came become inflamed. When it moves back and forth over the surface of a bone, it can become irritated and inflamed such as in ITB friction syndrome, which produces knee pain in runners and cyclists. Nerves endings that become entangled in scar tissue that develops in tendons such as the achilles or patellar tendons become chronically inflamed and are thought to play a major role in pain that develops from those overuse injuries.  The end of the nerve that terminates in the skin and tissue immediately beneath it easily becomes inflamed.  A nerve such as the saphenous nerve can also become inflamed as a result of surgery in the knee when part of the hamstring is used to create a graft for ACL repair. 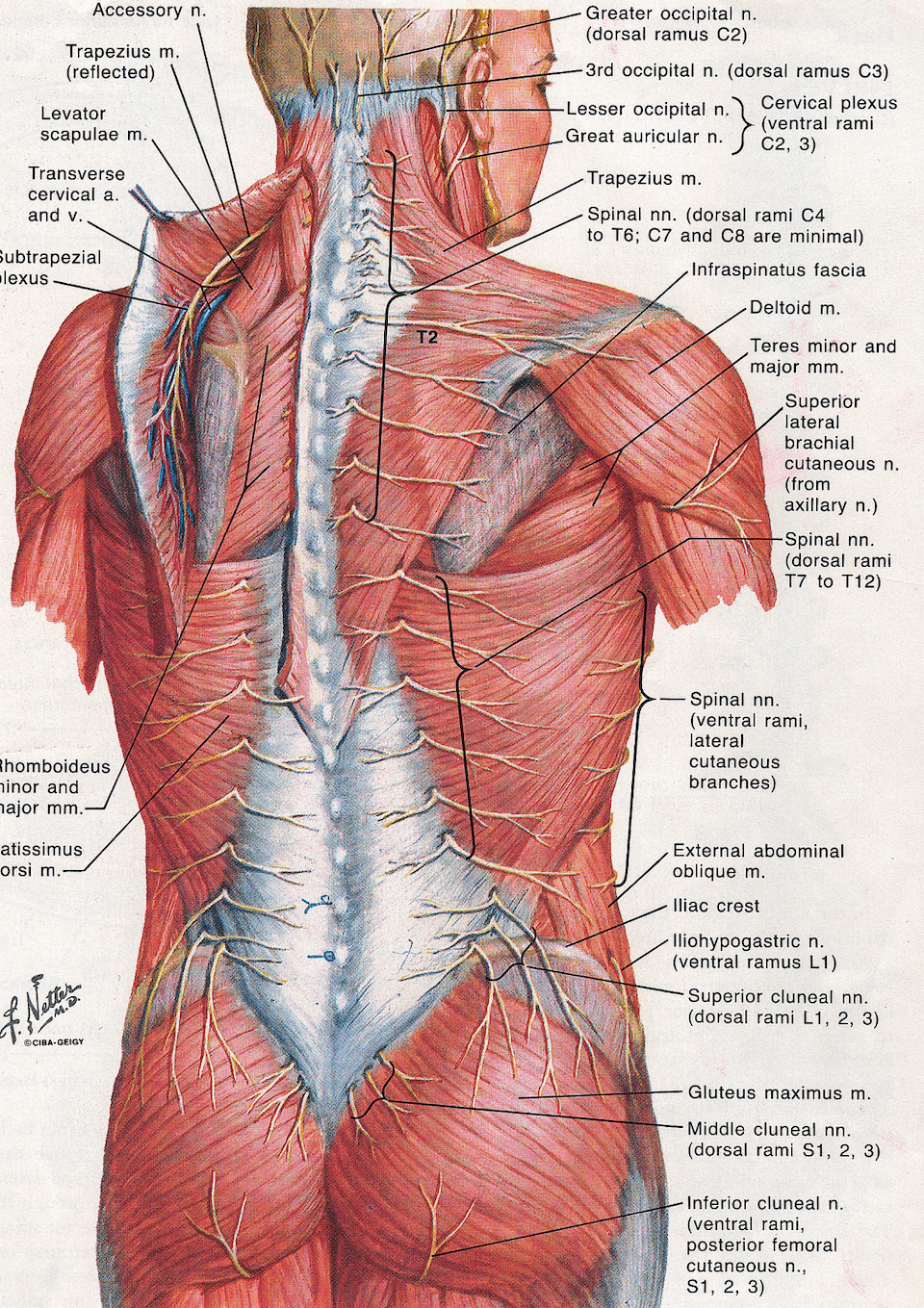 The illustration to the left shows sensory nerves (yellow structures) passing through connective tissue called fascia and when nerves pass through fascia they become inflamed.

These tender areas have been called trigger points.

Dr. John Lyfgogt (pronounced lift-off) discovered that these injured nerves can be treated with dextrose, which is a naturally occurring carbohydrate utilized by our body for energy.

When dextrose is concentrated at 5% and the pH is adjusted to around 7.4, the dextrose enters the nerve cell receptor to allow the “door” to open therefore restoring the cell to its normal function and leading to the decrease and eventual elimination of pain.

Think of the cells as being “hangry” in that the cell needs dextrose to function normally.

Perineural Injection Therapy involves the physician understanding the anatomy of these sensory nerves as they course throughout the body.  A series of injections containing the dextrose solution is placed underneath the skin much in the same way as getting a TB test or a “pinprick.”  A very short, small needle is used to treat along the course of the nerve. 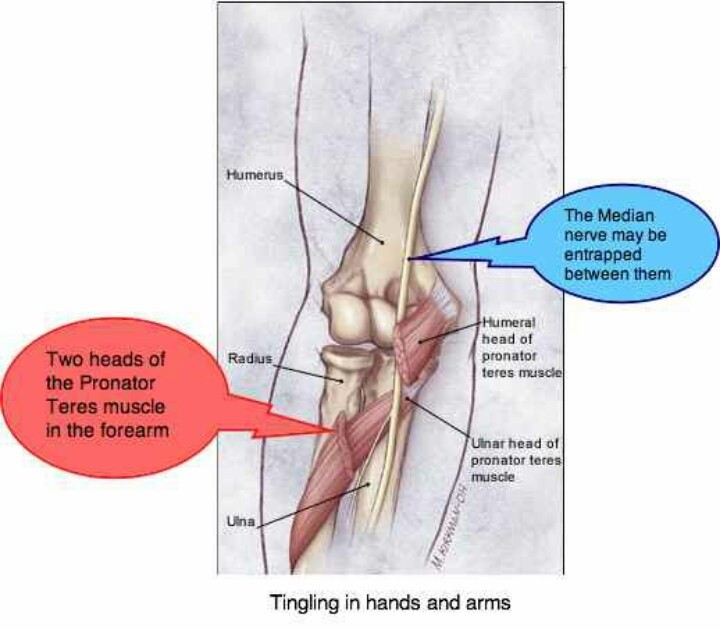 The illustration above shows the median nerve entrapped between the pronator muscles in the forearm.  The median nerve (like all other sensory nerves) sends hundreds of tiny nerve endings that reach just below the skin as shown below and for the treatment to be effective,  the needle only needs to get below the skin to reach the individual nerve fibers.  This allows the use of a very short small needle.

The number of injections that are given depends on various factors such as the number of different nerves inflamed, how much of the nerve is inflamed, and how long the nerve has been inflamed.

For instance, in a patient that has had a total knee replacement, their pain many only be along the surgical incision and that is a very simple treatment that takes a few minutes.   If a patient had a knee replacement and has pain that involves their entire knee, the treatment can be very lengthy and involves all the nerves supplying sensation to the joint.  The same would hold true for a patient that has suffered a whiplash injury to the neck.

Most patients will require 4-6 Perineural Injection Therapy treatments spaced anywhere for 7-10 days to 2-4 weeks apart depending on their condition. No pain meds or local anesthetics are required.

There are no medication restrictions for patients receiving Perineural Injection Therapy and well over 85% of patients respond.  Anti-inflammatory medicines taken for other conditions do not need to be stopped. Patients taking opiate pain medications tend not to do as well because the opiate competes with the receptor on the cell and can keep dextrose from getting into the cell.

As far as activity restrictions, patients are encouraged to remain active but only to the point where the given activity does not increase the pain during or after the activity.

Since this is drug-free treatment, and dextrose is a part of normal human function, side effects are rare and including occasional small bruises at the site of injection.  Allergy is not an issue. Although infection is a potential side effect anytime the skin is infiltrated, we have not had any occur in our patient population.

Insurance companies in the States and Britain consider the treatment “unproven” although insurers in the remainder of the world routinely cover these treatments. The cost of the treatment is dependent on the number of nerves treated as well as the complexity of the neurogenic inflammation.