The content in this blog was written as an article by Charlie Goldsmith for the Cincinnati Enquirer. See the complete article here. 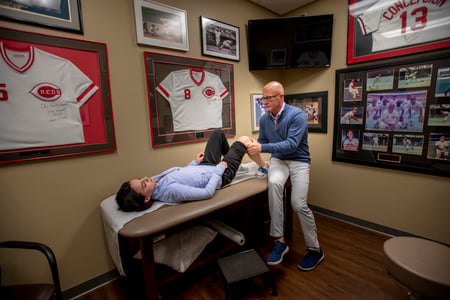 Early in the third quarter, Burrow dropped back to pass and took a hit to his knee after he threw the ball. Burrow tore his ACL, according to Ian Rapoport of the NFL Network. The Bengals would not confirm the NFL Network report of a torn ACL and Bengals’ head coach Zac Taylor is expected to give an update Monday on Burrow’s status.

Mercy Health, whose Dr. Marc T. Galloway is the team’s physician, issued the following statement via Nanette Bentley, spokeswoman for Bon Secours Mercy Health: “Due to health privacy laws, we are unable to comment.”

If Burrow did tear his ACL, Cincinnati Reds medical director Dr. Timothy Kremchek told The Enquirer there’s a realistic expectation that Burrow should come back in nine to 12 months, which ranges from late August to late November, 2021.

“At the quarterback position, they recover extremely well in a very predictable way,” said Kremchek, who has also consulted for NFL, college football and high school players at Beacon Orthopedics & Sports Medicine. “There’s a lot of optimism that he could come back 100% as long as he’s got the right treatment at the right time and we don’t rush him.”

He said several other quarterbacks, including Tom Brady, have had a similar injury and returned to play at a high level. 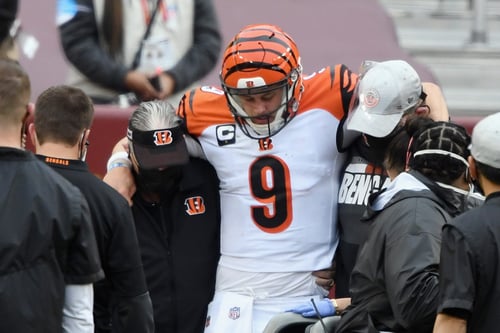 “That’s the type of injury where the knee takes all of the stress,” Kremchek said. “It’s a horrible way to get hit, so there’s no question he had significant ligament damage.”

Kremchek said Burrow’s knee likely started swelling within 20 minutes after the shock wore off. After heading to the locker room, it’s normal for a player to receive an MRI to ensure there’s no other structural damage to the leg.

For Burrow, Kremchek said potential areas of concern include the integrity of his ACL and MCL as well as his meniscus and his kneecap.

“If the ACL is torn, definitely the MCL was torn with it,” Kremchek said. “It’s not just going to be an isolated ACL. There are other injuries inside of the knee. To just say that it’s an ACL injury is probably underestimating it.”

Kremchek said Burrow will likely have surgery once the swelling in his knee settles down. Burrow’s next four steps will be “regaining motion, function, strength and big function.”

Kremchek said Burrow will likely take six weeks to regain motion in his knee. After that, Burrow will go through about four months of strength training, followed by four months of functional training designed to get Burrow to get back onto the football field.

The final step is sport-specific and position-specific training.