Unfortunately, left handed starter Felix Doubront won’t be finishing his season with the Oakland A’s. While pitching against the Giants, Doubront started to feel some pain in his elbow. This was initially diagnosed as some ligament deficiencies, according to the initial MRI.

When it came to getting a second opinion, Doubront chose one of the MLB’s leading orthopedists, Dr. Tim Kremchek of Beacon Orthopaedics and 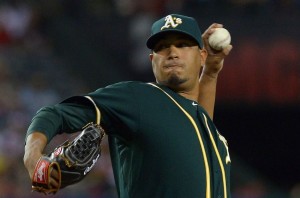 Sports Medicine. Dr. Kremchek is also the Medical Director for the Cincinnati Reds baseball club. Having performed well over 3,000 Tommy John surgeries, he is widely considered the leading expert on ligament damage from overuse injuries.

Venezuelan-born Felix Doubront made his MLB debut in 2010. He has since spent time with the Cubs, Blue Jays, and Red Sox clubs, even pitching in the 2013 World Series. He seemed to really find his groove with the A’s. His ligament fraying is the result of overuse, which is very common among major league pitchers. Unfortunately for Doubront, it happened at a bad time. After putting up some impressive stats in 2015, Doubront is only under team control until 2017. Typical recovery time for a pitcher’s first Tommy John surgery is a year to a year and a half, which means Doubront could be back on the mound as early as May of 2017.

He is certainly not delaying the procedure, though. As soon as he heard Dr. Kremchek’s diagnosis, Doubront scheduled the surgery. He is currently slated to get a new ulnar collateral ligament on Tuesday. From there, the recovery process involves physical therapy and learning to throw again.

To read the full feature by John Hickey, as published in the Mercury News, please click here.