To read the full story by David Jablonski in the Dayton Daily News, click here.

Forty years after he graduated from Wittenberg University, Dr. Tim Kremchek looks back fondly on his days in Springfield.

That time was so important to his career path — one that led to what is now a 25-year run as the medical director for the Cincinnati Reds — he has given back to the school in donations to help fund The Steemer, the indoor facility that opened in 2019, and an athletic training facility that bears his name inside the HPER Center.

Kremchek, nicknamed “Doc Hollywood” by Hall of Fame broadcaster Marty Brennaman in the 1990s, is well known by Reds fans. He also has had a consistent presence at his alma mater over the years. It’s not uncommon to see him watching football games from the turf at Edwards-Maurer Field, and for every Joey Votto he has operated on, there’s a Ryan Holmes, a former Wittenberg quarterback, he has helped return from injury.

“It’s been a great relationship,” Kremchek said Tuesday. “Wittenberg really helped mold me. I wouldn’t have been able to go to medical school or do any of the things I wanted to do if I had transferred out of Wittenberg.”

Leaving the school crossed Kremchek’s mind early in his college career. He picked Wittenberg in part because he wanted to play baseball. He went to work for his dad, Dr. Edward Kremchek, who preceded him in orthopaedics, one summer and thought about attending school closer to home. Wittenberg, however, convinced him to stay and pledged to work with him on a pre-med major.

Among the professors who stood out for Kremchek were Chuck Shaffer and Nelson Sartoris.

“(Shaffer) was an immunology teacher,” Kremchek said. “He was fantastic. He was a pilot. He loved baseball. He was very, very bright in the science department and was extremely, extremely supportive of what I wanted to do. Sartoris was our organic chemistry teacher, and he was one of those guys that totally understood the baseball and the sports and the fraternity. As hard as organic chemistry was, it was one of my favorite classes and one of the classes I did best in.”

Kremcheck, a graduate of Indian Hill High School in Cincinnati, played first base for the Tigers. He realized early in his college career he didn’t have the ability to play professional baseball but never imagined how much of his life he would spend at that level — even if it wasn’t in uniform. 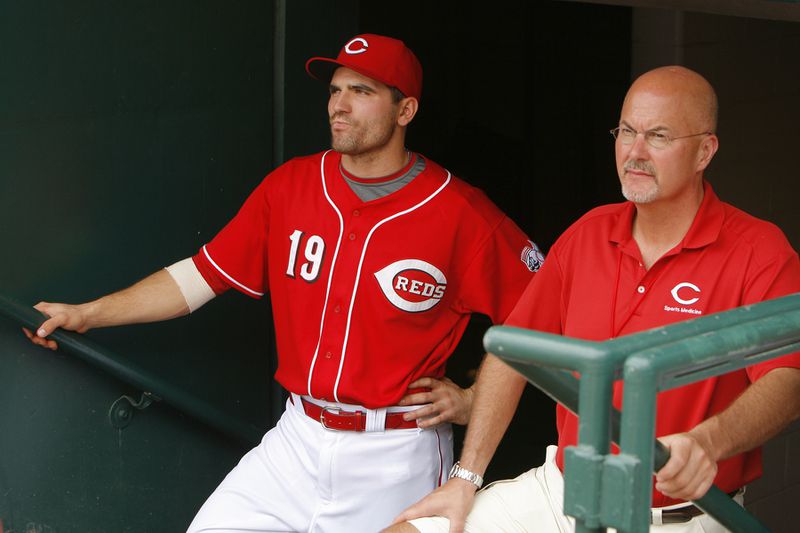 The job with the Reds started in November of 1996. Jim Bowden, then the general manager of the Reds, hired Kremchek, who by then had become a well-respected orthopaedic surgeon who had co-founded Beacon Orthopaedics & Sports Medicine. Bowden added to Kremchek’s duties by asking him to speak to the media about injuries. That’s how Kremchek became a household name in Cincinnati.

In 1997, his first season, for example, Kremchek talked to reporters after performing foot surgery on shortstop Barry Larkin.

“Couldn’t have gone any better,” Kremchek said then. “This was outstanding. It will make him much better. His movement will be better, he’ll be pain-free. By next season, we expect to see the Barry Larkin of old.”

In 2004, Kremchek repaired Ken Griffey Jr.’s torn hamstring. He used three screws to attach the tendon to the bone.

”Three years ago, nobody heard of this surgery, never heard of a torn hamstring being fixed,” Kremchek said then. ““Nobody was doing it. With this type of injury, there is no way Griffey could ever again play center field … or left field … or right field … or anywhere. Zero. None.”

“I’ll cherish this forever because of the hard work I put in and the behind-the-scenes people who helped me like (trainer) Mark Mann and Dr. Kremchek,” Griffey said then. “They had to put up with a lot from me, physically and mentally, because I always want to be the best that I can be.” Through all that time, Kremchek continued working for Wittenberg. In 2006, he even repaired torn ACLs for twin brothers Derrick and Desmond Braziel, who played football for Wittenberg, about five weeks apart.

Kremchek also serves as a team physician for Wilmington College and as a medical director for a number of high schools in the Cincinnati area.

Despite his long history with the Reds, Kremchek first cheered for the Boston Red Sox. HIs dad worked at Westover Air Force Base in Chicopee, Mass., when he was 5 years old.

The family moved to Ohio in 1968, and the only thing Kremchek missed at first was the Red Sox. Then his dad took him to Crosley Field to see a game between the Reds and St. Louis Cardinals. Kremchek quickly switched allegiances, and by the time, he was in medical school at the University of Cincinnati in the 1980s, he had made it a goal to make the Reds a part of his working life.

Kremchek was sitting in the green seats at Riverfront Stadium when he told a friend, “One day my goal is to come back and take care of the Cincinnati Reds baseball team.”

Twenty five years after accomplishing that goal, Kremchek said, “It’s been a dream come true. Not only because I love the game and you get seasons like this when every game means something, but you get to know the players. Who would have thought Barry Larkin was going to be an excellent friend of mine, or Ken Griffey Jr., or Johnny Bench or even Pete Rose?”

Kremchek grew up watching the Big Red Machine and then operated on many of the players — Rose, Bench and Morgan to name a few — after their careers ended.

Kremchek feels fortunate he got the job with the Reds at the relatively young age of 34. A one-year fellowship at the Alabama Sports Medicine Institute in Birmingham, Ala., under famed sports surgeon Dr. James Andrews helped Kremchek rise in his field. He was working as the team doctor for the Cincinnati Cyclones when Bowden heard about him.

All these years later, everyone knows about Kremchek, and he has no plans to retire anytime soon.

“I keep redefining it every year,” he said. “I have a couple young partners come down and work games with me and help me. What makes it fun is when I go down there I sit in the owner’s box with (Bob) Castellini, and he’s the biggest Reds fan you’re ever going to meet. He loves the team, loves the game and wants to win so bad. He’s so passionate about it. And nobody else sits with him. He’ll occasionally have dignitaries sit with him, but for the most part, it’s him and me and his wife watching games, dissecting games and just enjoying it. It’s just a different approach from when I started with Jim Bowden, who was on pins and needles.”

This season ranks as one of the most fun in recent memory for Kremchek. The Reds entered the weekend with the lead in the race for the second wild card.

“This reminds me of 2010, 2012,” Kremchek said. “You get home and you can’t wait — when they’re on the road — to watch the game. You know you want to win. You know what you need to do to get to the playoffs. If you’re a real baseball guy and you follow the Reds, oh my gosh, you look at the schedule and it’s exciting. September is not, ‘When do the Bengals and Bearcats play?’ It’s: ‘What are the Reds doing?’ it’s an absolute ball.”