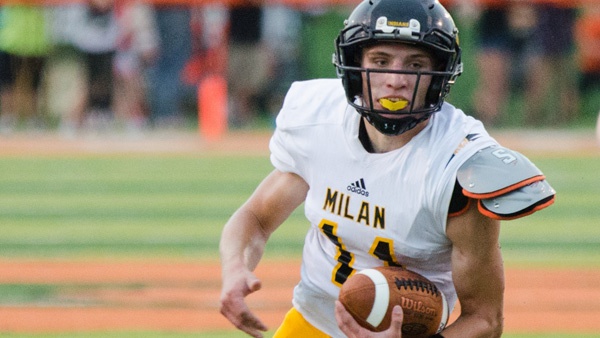 Shared from the Eagle Online

Hospital staff in the neonatal intensive care unit told his parents he might not be able to learn correctly. He would also look different from most kids and have a constant cough. Keeping up with others while playing or participating in athletics would be out of the question.

According to the Cystic Fibrosis Foundation, it is a progressive, genetic disease that causes persistent lung infections and limits the ability to breathe over time. Certainly, any athlete would find it difficult to excel with CF.

Knowing the odds were against him, David has worked throughout his young life to prove the diagnosis wrong.

That mission has been accomplished in every way. He became the starting quarterback on Milan High School’s football team, passing for a combined 1,779 yards and 21 touchdowns in his three varsity seasons. He also plays baseball for the Indians.

In the classroom, he’s maintained a stellar 3.97 GPA.

“I just hope my story can inspire other people who do have CF,” David says. “I’ve seen other kids with the same thing I have. After maybe hearing a story like mine, maybe they can have a little bit of hope and feel like they can someday do the same thing.”

Carpenter has been named the recipient of the Dr. Thomas A. Brady Comeback Award from Methodist Sports Medicine. The award goes to one male and one female college or high school athlete in the state of Indiana each year.

David will formally receive the honor at a ceremony in Indianapolis on May 10.

“I really didn’t expect to win the award. I was really humbled,” David shares, adding he believes it has been God’s grace allowing him to do everything he has been able to.

The modest teen kept his CF battle largely hidden from his teammates. Milan High School varsity football coach and principal Ryan Langferman says most of the team wasn’t aware of David’s condition until an overnight camping trip last summer. Getting ready for bed, they witnessed David strap on a vest which aids breathing as he sleeps.

“He has never let his battle with CF slow him down or lower his expectations. He has a daily regimen of pills and treatments that allow him to excel at a typical teenage lifestyle. I never heard him use CF as an excuse as to why he could not do something. He never missed a workout, practice or rep,” says Langferman.

The young man’s work ethic and character are second to none, the coach insists.

As if playing football while managing the symptoms of CF weren’t tough enough, another health issue kept David from playing much of his senior year. In a week three game against Lawrenceburg, he suffered a broken leg.

Ever the tough guy and fearless leader, the QB tried walking it off on the sidelines until coaches and the team trainer opted to keep him out of the game. A visit to the doctor the following morning would reveal he had broken the bone.

“It was your last ride, your last season of high school football. It’s not the way you wanted it to end,” David reflects.

But he didn’t quit on football or his team. David started rehab with the help of team trainer Robbie Kippler of Beacon Orthopaedics & Sports Medicine.

Six weeks later, he returned to the field and was again under center just in time for Milan’s senior night game. It was a victory for the Indians.

“He will never accept it stopping him from reaching his goals. He was a longshot to be able to compete at football at all, at the high school level, so when he continued his hard work, and was able to become starting varsity QB, his mother’s and my proud heart beat out of our chests,” he said.

“Don’t bet against this kid,” Dad concluded his letter.

The Brady Comeback Award comes with a $1,000 scholarship, which David will put to use at Franklin College. He’ll major in elementary education and continue playing football for the Grizzlies.

David’s goals are to someday be a teacher and football coach.

If you’ve learned anything from this article, don’t bet against him.

Shared from the Eagle Online